Pencil drawing of the State Court House, Carneal Johnston, and Wright, architects, 1933, circa, Supreme Court of Virginia Archives. This building, located near the southeastern corner of Capitol Square, housed the Supreme Court of Virginia from 1847 to 1865. When it burned, most of the records of the court from 1779 to 1865 were destroyed. The building also housed the General Court, the High Court of Chancery, and the Richmond Superior Court.

The Supreme Court of Virginia, the state’s highest appellate court, was created by acts of assembly passed in 1778 and 1779 and given the name the Court of Appeals. It met for the first time in Williamsburg on August 30, 1779. Shortly thereafter, the court was moved to Richmond and held its sessions in the Henrico County Courthouse.

A legislative act of 1788 abolished the Court of Admiralty and provided that the Court of Appeals be established as a separate court with its own five judges, elected by joint vote of both houses of the General Assembly. Judges were commissioned by the governor and served for life subject to good behavior. The number of judges was reduced from five to three by act of assembly in 1806, but restored to five by act of assembly in 1810.

The Constitution of 1830 provided for the new election of the judges of the superior courts and changed the name of the highest court to the Supreme Court of Appeals. Legislation passed in 1831 required the court to hold an annual session in July in Lewisburg, in Greenbrier County (now West Virginia) and created the office of president, to be filled by “particular election or appointment and commission.” Henry St. George Tucker was elected judge and the first president of the court by the General Assembly on April 11, 1831, replacing Francis Taliaferro Brooke. After Tucker’s resignation in 1841, the court named William H. Cabell its second president.

The Constitution of 1851 instituted the election of judges by the public. It also required the court to state in writing its reasons for reversing or affirming a judgment or a decree. John James Allen, the judge with the most seniority after Cabell resigned in 1850 (with the exception of the Francis Brooke, who died on March 3, 1851) presided over the court from 1851 to 1865 but was not designated president in the court order books. Under the terms of the Constitution of 1864, the responsibility for electing judges was returned to the General Assembly and the number of judges was reduced from five to three. Four judges were elected under the authority of this constitution: Lucas Powell Thompson, who died shortly after he was elected; Richard Cassius Lee Moncure, William Joynes, and Alexander Rives. Moncure, Joynes, and Rives served from 1866 to 1869.

On June 3, 1869, Major General John Schofield, commanding general of Virginia during military reconstruction, dismissed Moncure, Joynes, and Rives in compliance with passage of a federal law requiring removal of officials in Texas and Virginia with any record of service to the Confederacy. On June 9, 1869, he appointed three new judges: Horace Blois Burnham, Orloff Mather Dorman, and Westel Willoughby. They served until a new state constitution was ratified in 1870. 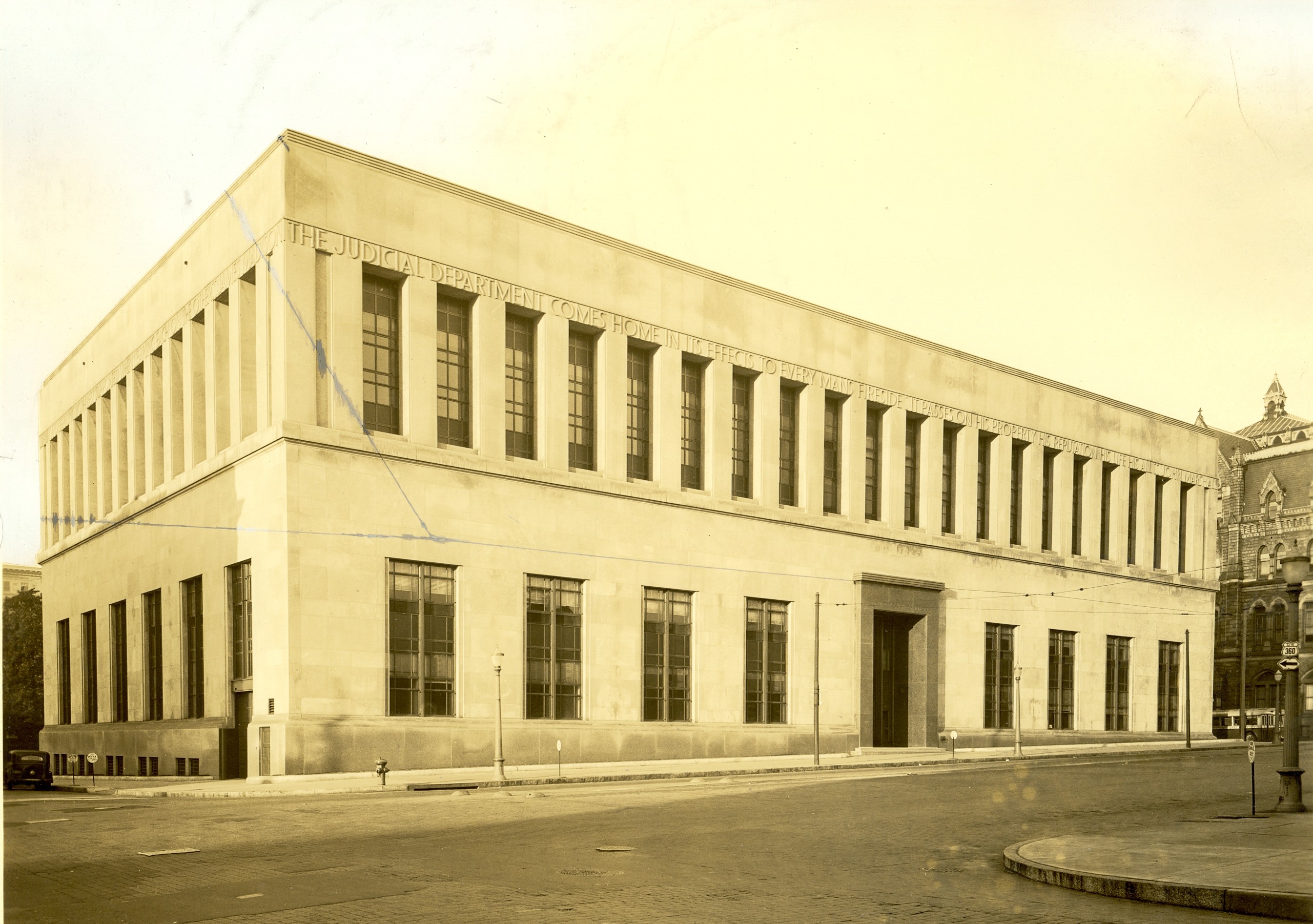 Photograph, circa 1940, of the The Supreme Court of Appeals – State Library Building. This structure, located on Broad Street north of Capitol Square, housed the court from 1941 to 1981. It was renovated and renamed the Patrick Henry Building in 2005.

The Constitution of 1870 restored the number of judges to five, removed the provision requiring nomination by the governor, and returned to the legislature the authority to elect new judges to the unexpired term of their predecessor rather than a full 12-year term. It also required that sessions of court be held annually in the localities of Wytheville, Staunton, and Winchester. The office of president was restored by act of assembly in 1870, with the added stipulation that the president be appointed by the other members of the court. Richard Cassius Lee Moncure, the judge with the most seniority, was elected president by his colleagues in March 1870, making him the third official president in the court’s history.

Amendments to the constitution in 1928 increased the number of judges from five to seven, introduced the titles justice and chief justice in place of judge and president, and required the justice with the most seniority be designated chief justice. The court adopted the current seal of the court, after the Raphael painting Justitia, on October 11, 1935. The Constitution of 1971 renamed the court the Supreme Court of Virginia and ended the requirement that the court hold sessions in other parts of the state. It also provided that newly elected justices be elected to a full term, the policy observed under the Constitutions of 1861 and 1864. Richard H. Poff, who was elected to a 12-year term in January 1973, was the first justice elected under the new policy.

For the early history of the office of chief justice, see David John Mays Edmund Pendleton, 1721-1803: A Biography v. 2 (1952; reprint, Richmond Va.: Virginia State Library, 1984), v. 2 p. 155, note 5. In an autobiographical essay written in 1793, Pendleton recalled he was elected to the presidency of the High Court of Chancery, but the term is not used in the statutes or the order book until 1831. Pendleton also referred to himself as “head of the Judiciary Department”; Mays, v. 1, 356.