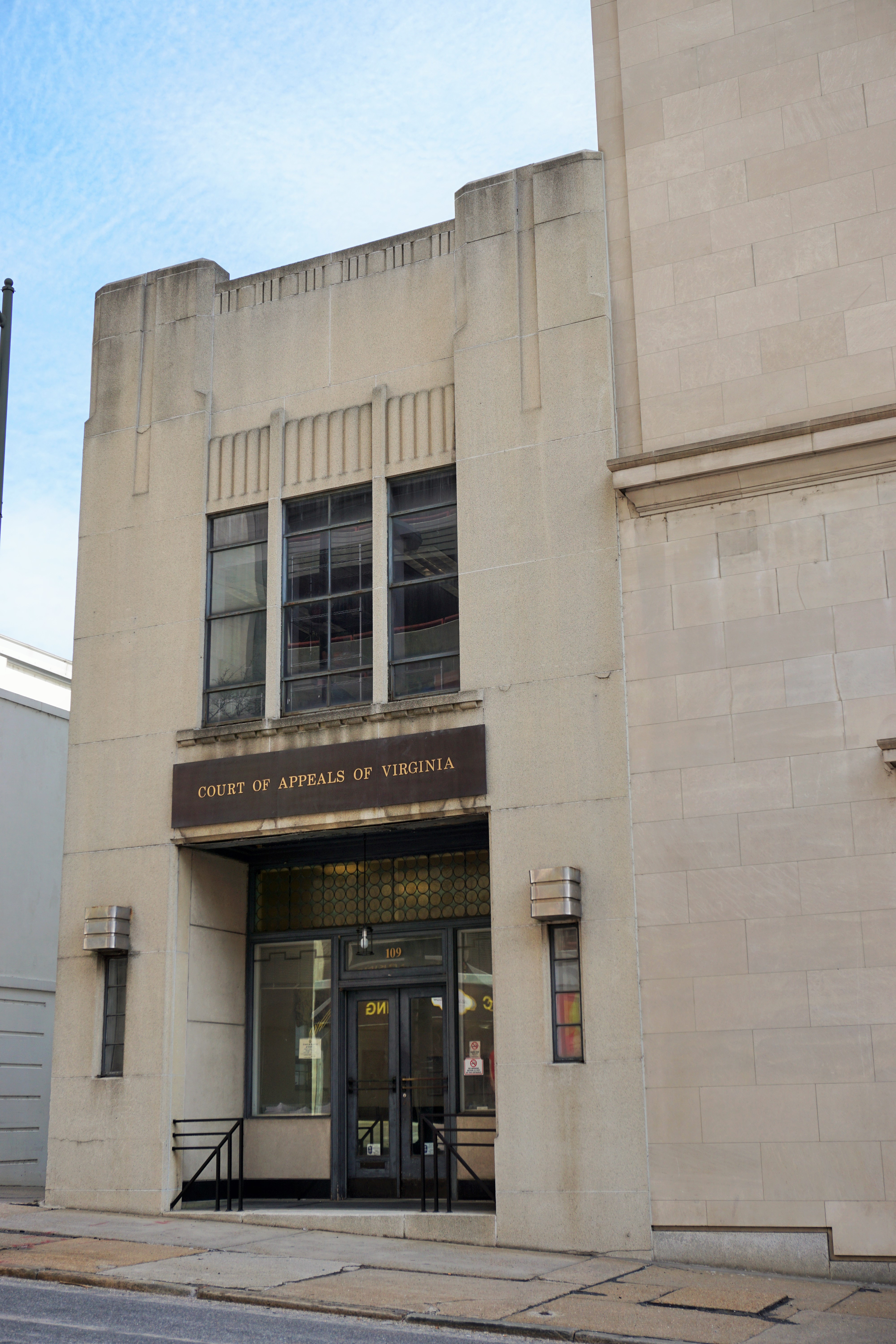 Rose & Lafoon Building; photo by Michael Hart, 2015. Named for Rose & Lafoon, Inc., a realty company that commissioned it in 1938, the Rose & Lafoon Building houses the offices of the Clerk of the Court of Appeals. The building was designed by Richmond architect Edward Sinnott, Sr. (1890-1971) and is an example of his work in the Art Deco School. Sinnott also designed the Henrico Theater in Highland Springs around the same time. The theater, which opened in 1938, is on the National Register of Historic Places.

The Court of Appeals of Virginia provides appellate review of circuit court decisions in civil, criminal, and administrative agency cases, and final decisions of the Virginia Workers’ Compensation Commission. Most appeals to the Court of Appeals are a matter of right, though the Commonwealth must petition the Court of Appeals if it wishes to appeal a decision in a criminal case. The Court of Appeals also has jurisdiction to hear interlocutory appeals and petitions for review of injunctions through a discretionary petition process. The Court has original jurisdiction to issue writs of mandamus (ordering a public official to perform their duty), prohibition (ordering a public official to stop an action), and habeas corpus (ordering the official with custody of a detained person to produce them to the Court to determine whether such custody is proper) in any case over which the Court would have appellate jurisdiction. It also has jurisdiction in writs of actual innocence based on non-biological evidence.

The decisions of the Court of Appeals are final in pre-trial Commonwealth’s appeals, appeals involving involuntary treatment of prisoners, and appeals involving denial of a concealed handgun permit. In pre-trial Commonwealth’s appeals, however, if a defendant is convicted, he or she may seek review of the pre-trial appeal ruling on direct appeal. All other decisions of the Court of Appeals may be appealed to the Supreme Court.

The Court of Appeals is located in the Supreme Court Building and the attached Rose & Lafoon Building in Richmond, with additional hearing locations around the state. The court is composed of seventeen judges, each elected to an eight-year term by a majority of members of the General Assembly. A chief judge is appointed by a majority vote of the judges and serves a term of four years.

The Court of Appeals sits in panels that consist of at least three judges, which rotate on a random basis. Panels hear cases independent of one another. Under special circumstances the court may also sit en banc (as a whole), and these decisions overrule any previous decisions rendered by a panel or by the full court. The clerk of the Court of Appeals receives, processes, and maintains the records of appeals and subsequent documents filed with the court.