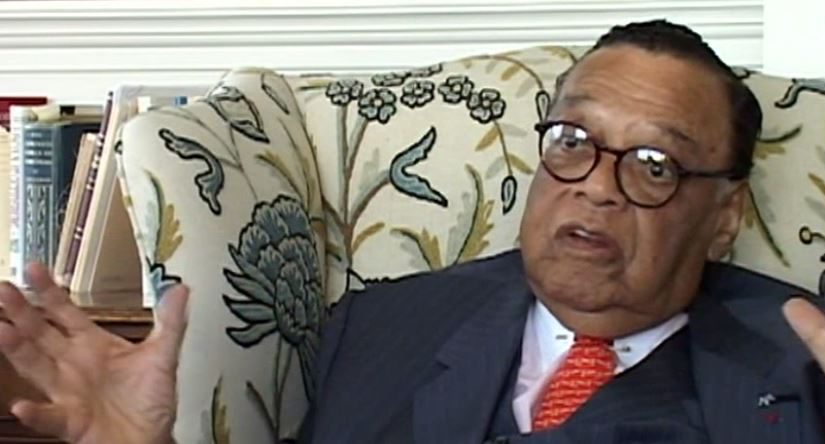 Listen to an audio recording of an oral history interview with attorney William T. Coleman, Jr. Transcript below. Coleman was lead strategist and co-author of the legal brief in Brown v. Board of Education (1954) in which the Supreme Court outlawed segregation in public schools, and Secretary of Transportation, 1975-1977. Coleman was interviewed by Dr. Cassandra Newby-Alexander, Professor of History at Norfolk State University, at the law firm O’Melveny & Myers in Washington, DC.

Coleman discusses his parents’ roots in Baltimore, Maryland, the history of his mother’s family (Mason), his youth in suburban Philadelphia, and discrimination he experienced there, and attending the University of Pennsylvania and Harvard University Law School. He talks about his experiences in World War II training as a pilot in Mississippi and Texas, attending Harvard University business school while he was in the army, and defending African American pilots who were denied access to the officers’ club at Freeman Field in Seymour, Indiana in 1945. Coleman describes his experiences clerking for Judge Herbert F. Goodrich of the U.S. Court of Appeals, Third Circuit, and for U.S. Supreme Court Justice Felix Frankfurter. He discusses his work as a lawyer in New York City and Philadelphia, and on the Brown v. Board of Education and Little Rock school desegregation cases. He also discusses his work on the Eisenhower Committee on Government Employment Policy, formed to expand employment of African Americans in federal government, his work as General Counsel on the Warren Commission that investigated the assassination of President Kennedy, his accomplishments as Secretary of Transportation, and advising President Ford on the Boston school busing case. Coleman also mentions his relationships with civil rights advocates Thurgood Marshall, Charles H. Houston, William H. Hastie; Elliott L. Richardson, who also clerked with Justice Frankfurter; and President Lyndon Johnson.