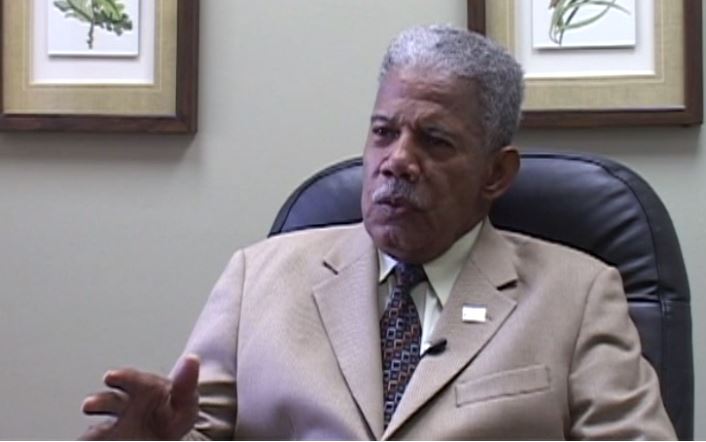 Listen to an audio recording of a two-part oral history interview of Senator Henry L. Marsh, III. Transcripts below.

In the first interview, conducted September 8, 2008, Senator Marsh discusses his parents’ roots in Newport News, Virginia and North Carolina, his early childhood in Richmond and Smithfield, Virginia, attending segregated schools in Isle of Wight County and Richmond, his siblings, and his children. He talks about the influence of teachers and early work experiences: Marsh was a newspaper carrier and worked in a restaurant in Richmond; he attended Maggie Walker High School, where he edited the school newspaper and became involved in the school’s NAACP chapter; and he became involved in student government at Virginia Union University. He relates the experience of protesting massive resistance in January 1956 and witnessing Oliver Hill’s forceful denunciation of it to the all-white Virginia legislature. Marsh discusses attending law school at Howard University and the influence of Charles Houston and other students on his development as a civil rights attorney. He talks at length about his early career as a civil rights lawyer in Richmond, particularly his work on 55 school desegregation and busing cases, his early years at the Tucker & Marsh law firm, and his involvement in the lengthy court battle over the desegregation of Norfolk schools.

In the October 8, 2008 interview, Marsh continues to describe his work as a civil rights attorney and elaborates in more detail on his work in the Norfolk schools case and other cases in the Tidewater area. He talks about his relationship with U.S. district court judge Walter E. Hoffman, school desegregation cases in Giles County, Portsmouth, and Nansemond County. He also discusses opposition he faced from African Americans in Portsmouth and Norfolk who did not want to integrate black schools, and opposition he faced from NAACP leader Ben Chavis and Norfolk civil rights lawyer Jim Jordan. Marsh talks about his decision to become involved in politics in Richmond, testifying in congressional hearings on whether Virginia should be included in the provisions of the Voting Rights Act of 1964, running into Senator Edward Kennedy and providing him with evidence of continuing voter discrimination in Virginia, and his work litigating employee discrimination cases, particularly a class-action tobacco workers case. He also talks about his partner S.W. Tucker and Tucker’s influence on him as a mentor and a teacher. He relates the experience of seeing Chicago attorney Bob Ming defend Tucker in a Greensville County trial, in which Tucker was charged with unethical conduct. Marsh also mentions his disagreement with Oliver Hill over whether to endorse Lewis Powell’s nomination to the U.S. Supreme Court, his professional involvement in the National Caucus of Elected Officials and the U.S. Conference of Mayors, his early support of Jimmy Carter, and efforts to restrict sprawl and preserve historic districts in Richmond when he was mayor of Richmond. The interview closes with a discussion of Marsh’s decision to run for the state senate and his career there.